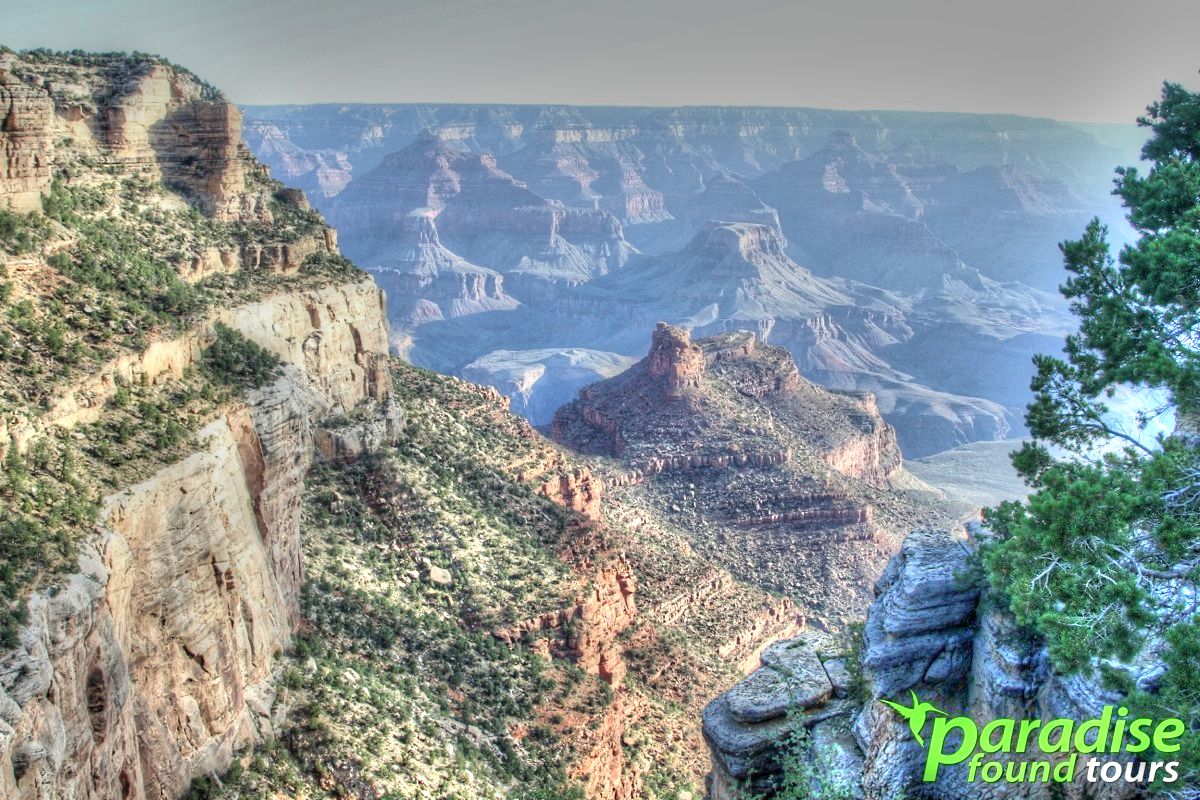 The Grand Canyon South Rim (National Park) is the largest out of all the four parts (this section extends 18 miles in width and a mile in depth). The South Rim is often called the “True Grand Canyon” as it has some of the most magnificent views of the canyon. Visitors have access to more than a dozen starting viewpoints, as well as an abundance of tour services and various family activities. The South Rim is very accessible, as it is just 300 miles from either Las Vegas or Phoenix, equivalent to an hour’s flight or a 4 1/2-hour drive either way.

The Grand Canyon South Rim is open to visitors all year-round, and has an elevation of 7,000 ft. above sea level. As such, the Southern Rim boasts four distinct seasons. Summertime in the Grand Canyon is typically warm and dry, with a few monsoon storms during July and August. Fall and Spring can produce some of the best temperatures- around 65 to 75 degrees on afternoons, and around 20 degrees during the nights. Wintertime transforms the Grand Canyon into a veritable white paradise, with snow falling the heaviest during December up to February. Visitors are advised to bring their coats all season long.

Rocky erosion starts along the more mountainous part of the Grand Canyon, which is located in the South Rim region. The South has many rock outcroppings and famous formations (Wotan’s Throne, Brahman Temples and Zoroaster) that change color at different times of the day. You can see Bright Angel Trail and South Kaibab Trail and various other buttes (O’Neill), ravines and points as you scan the horizon.

Why is the Grand Canyon South Rim So Popular?

South Rim At A Glance:

The largest part of the Grand Canyon is also the most popular, due to an overwhelming number of reasons. The South Rim is the most tourist-friendly area, and it has the best modern conveniences you can ask for. You can go by the Canyon View Information Center in Mather Point and explore their bookstore, exhibits, buy maps or find out about the extensive Ranger program. You can stop by the Bright Angel Bicycles and Cafe for a quick break, or head off to Tusayan for a glimpse of a film showing on the IMAX Theatre or to book Grand Canyon tours. We do suggest booking Grand Canyon tours online and in advance.

A driving tour can take visitors up two parts, either to the east or west. The western travel is 13 km long and it leads to Hermit’s Point, with notable overlooks found along the way. Take scenic pictures along The Powell Memorial, Hopi Point or Mohave Point. At the end of the Hermit’s Road is the Hermit’s Rest, which is a small and cozy snack bar/souvenir shop designed by Mary Colter, an individual also responsible for crafting the look of the Watchtower, down at Desert View in the east. The eastern section is open to all vehicles all-year round, and it leads to tourists seeing the Watchtower, a famous stopover made of stones found in the area.

There are also many notable hiking trails- visitors can travail the Bright Angel Trail, starting near Bright Angel Lodge, or try out South Kaibab Trail, starting near Yaki Point for a more challenging walk. Finally, the Grandview Trail starts near the Grandview Point and leads down to Horseshoe Mesa, where a display of mining relics still exist for public viewing, before ending at Cottonwood Creek.

Experience the beauty of the natural landscape of Grand Canyon’s South Rim by taking our most popular Paradise Found Tours, the South Rim Bus Tour, in total comfort and safety. The grand tour starts from Las Vegas and deftly leads you to the best highlights the Grand Canyon South Rim has to offer. The bus stops first at the Grand Canyon Visitor Center and lets you take pictures on Mather Point, then moves on to the Grand Canyon Village, from where you can see El Tovar and Bright Angel Lodge and enjoy its delicious fares and drinks. You may also check out Lookout Studio, Kolb Studio, Verkamps and Hopi House. All the key lookouts and landmarks in the South Rim are covered, giving you the best Grand Canyon National Park immersion possible!

Guests may visit or stay at the renowned Phantom Ranch, the only resort that is located below the canyon rim. It has a dining hall and it is made up of small cabins and dormitories, and requires reservations in advance. Up for something more rustic? The Bright Angel Lodge will not disappoint. Along with the stay, you will experience a rich culture and heritage laden with old-fashioned charm. Opt in for a regular room or if you are looking for something more special, a stay at the special Buckey O’ Neill cabin. The Bright Angel restaurant serves up family meals all day. Head to the coffee shop for a hot cup or taste something sweet at the old ice-cream fountain. There’s also the Bright Angel Bar to serve up your favorite poison as you relax in the lodge. The Arizona Room nearby serves standard Southwestern fare such as gravy and biscuits, fajitas and ribs. The South Rim also has the finest accommodations in the El Tovar Hotel. Fine dining is an option at the El Tovar Dining Room, open for breakfast, lunch and dinner. You will need reservations for dinner, but the effort is well worth it because the atmosphere throws you back to the early 1910s, with some nice canyon views for good measure. After eating, you can sit back and relax with a beer or alcoholic drink in hand at the El Tovar Lounge. Other notable South Rim lodges are the following: Yavapai Lodge, Thunderbird Lodge, Maswik Lodge, and Kachina Lodge.

West Rim At A Glance:

Why is the Grand Canyon West Rim So Popular?

Though a smaller part and the tail-end of the Grand Canyon National Park, the West Rim boasts some truly awesome natural and man-made features. The Hualapai are natives that live within the Grand Canyon West. The term itself is a loose representation of the term “people of the blue-green water” due to the three spectacular waterfalls in the area. These tribes have lived there for thousands of years, thriving by practicing irrigated farming and hunting during the wintertime. The Reservation itself consists of more than 150,000 acres of land by the Grand Canyon’s western edge. Initially, this Indian Reservation was established in 1880, and was recently extended in 1975. The border encompasses the Grand Canyon National Park to the East and North, and the Lake Mead to the West. The tribe is well-known for their interesting culture and way of life, and their innate talent in creating beautiful crafts and arts. Visitors may go to the Havasu Canyon from Hualapai Hilltop, and ride, fly or hike to the Supai Village near the waterfalls.

Getting to Havasu Canyon is well worth the trip! You can see the awe-inspiring blue-green waterfalls Havasu Falls, Mooney Falls and the Navajo Falls, which make up a modern “Garden of Eden”. As mentioned, the path to Havasu Canyon is only available via helicopter, horseback or by foot. Visitors are required to pay $35 per person for the entrance. The canyon has some modern facilities such as a campground, a general store, a small hotel and post office. The Hualapai have partnered with some charting companies (including us!) to allow helicopters to land out from Las Vegas.

And of course, the Grand Canyon Skywalk. Located above the Hualapai Indian Reservation, the Skywalk is a huge platform made entirely of glass, elevated just 3,500 ft. above and past the Grand Canyon’s rim. This U-shaped, cantilevered walk was designed by David Jin and with the help of Locsha Engineering, a design firm out of Las Vegas. The overall width of the platform reaches 65 ft, and the length extending from the canyon posts juts to 70 ft. The beams are held up and supported by eight box posts anchored in concrete footings, which were in turn anchored to the canyon’s bedrock. The deck itself is made from layers of Saint-Gobain Diamant, interlayered with DuPont SentryGlas. The deck reaches up to around 10 feet, and the sidings are made from the same material as the deck. The structure is created to withstand high wind pressures and possible earthquakes. Overall, the Skywalk weighs at around 1.6 million pounds and was made within 2 days. The future of Skywalk includes a movie theatre, museum, gift shop, restaurants (including a plan for a high-end dining place called the Skywalk Cafe), and a VIP lounge. The Hualapai officials plan to create a 9,000 property in the future, with plans for casinos, golf courses, hotels and a cable car from the West Rim to the Colorado River.

Visitors at the West Rim may lay out for a picnic under the sun, or head out to the Trading Post for food and refreshments. Activities include pontoon boat rides on Lake Mead’s smooth waters, or take on the white water in motorized rafting trips. Guests may avail of helicopter tours for a trip around, or see the sun set in an awesome heli view. The West Rim isn’t as children-friendly as compared to the South Rim, as there may be times that an extended hike is needed. Grand Canyon West Rim is more suited for adventurous adults, for corporate team events or for romantic getaways.

The Grand Canyon West Rim allows visitors to look down below, or direct their gaze in front, where the Eagle Point beckons. The rock formation resembles that of an eagle, and is revered by the Hualapai natives living in the area. Up farther north is another majestic view of the canyon and its heart, the Colorado River. Should you wish to know more about the Hualapai, you can visit the Indian Cultural Center to know more about them. The Indian tribe owns the reservation, a million-acre settlement upon which the Skywalk reside. Viewers can also ride the free shuttle to Guano Point to see the Canyon’s gorge up close and personal.

Paradise Found Tours offers one day tours from Las Vegas to Grand Canyon including both the West Rim and to the South Rim of the Grand Canyon. Which rim would we suggest visiting? If time is not a problem and you have a full day to devote to sightseeing, we would recommend the Grand Canyon South Rim. This is the part of the Grand Canyon where the erosion begins. The South Rim is truly magnificent. Standing against the Guard rail at Mather Point is really the equivalent of standing in the middle of heaven. With all the amenities available at the South Rim, it is a favorite with parents of small kids and easy travel for the elderly. The fees are set by the government and are much less than the fees at the West. Thus making the destination a perfect fit for every budget.

If time is an issue and you would prefer to return early back to your hotel, the West Rim may be a wise choice. Bus tours to the West Rim of the Grand Canyon return back approximately 6:30 PM. The erosion at the West Rim is not as severe as it is at the South but there are thrills to be had nonetheless. The land is desert terrain and privately owned by the Hualapai Indian Tribe. The tribe have built an engaging attraction with the Skywalk glass bridge. Tourists come from all over the world to enjoy the adventure of walking on glass 4,000 feet above ground.

Whether it’s the majestic beauty of the South Rim or the thrills of the West Rim, the Grand Canyon surely delivers on giving you memories that will last a lifetime.