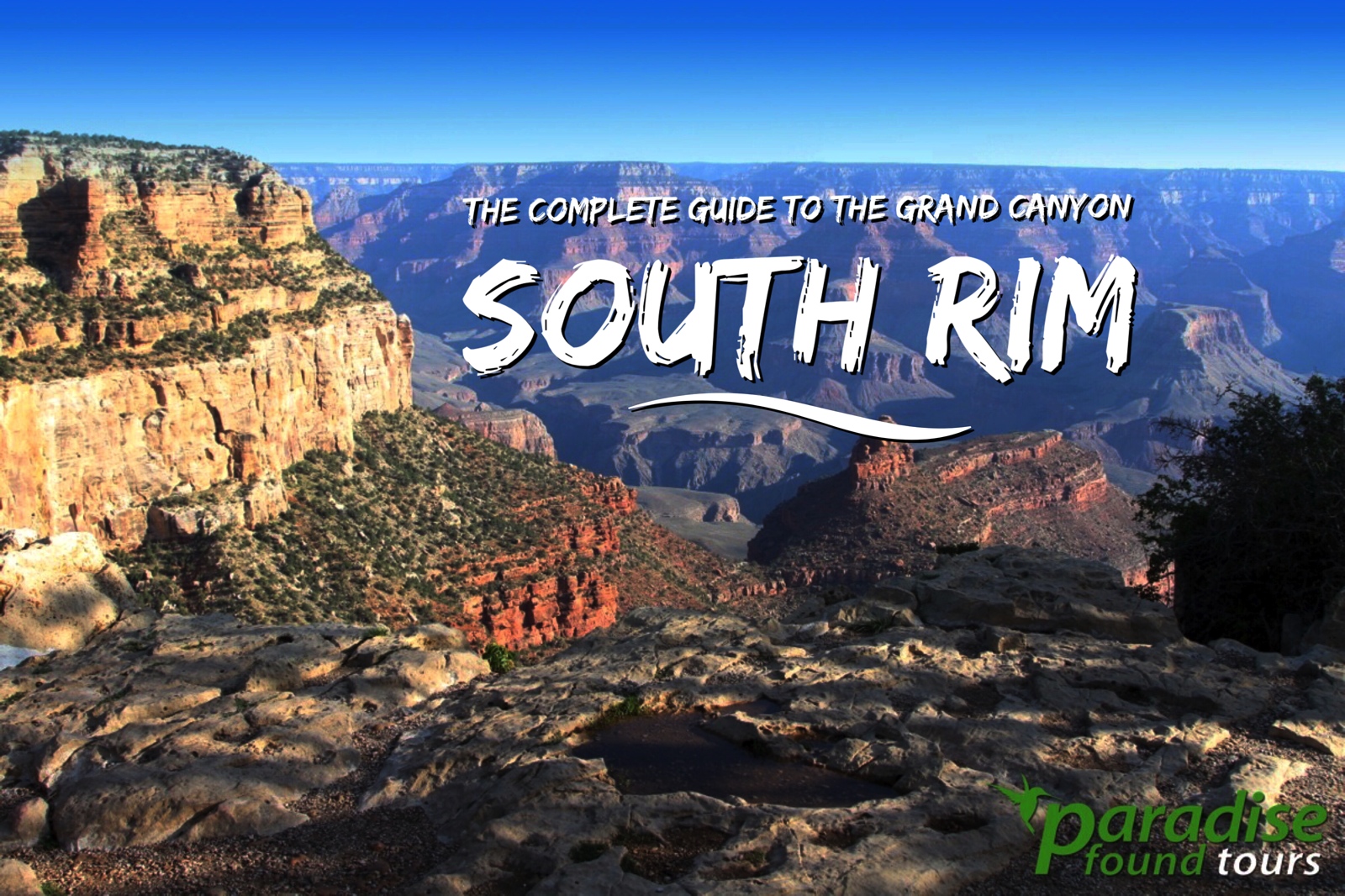 The Grand Canyon South Rim is the most visited location at the Grand Canyon National Park. The Grand Canyon is a huge, fascinating and beautiful gash formed through years and years of erosion. Located in Arizona, it is truly one of the most beautiful places on earth, an instantly recognizable landmark that everyone must see once in their lives. When you face the Grand Canyon, you’ll feel as if the secrets of the universe are there, running through the Colorado River and within its unfathomable cliff depths.

How does one describe this Canyon? Let’s start with the tributary canyons arranged in a sprawling, majestic manner. The size and depth alone might induce a wonderful feeling of vertigo. It is currently classified as a National Park in the U.S., and is no doubt considered as a Natural Wonder of the World.

The South Rim attracts over 5 million amazed visitors per year. Around 90 percent of all visitors see the fantastic natural spectacle when they arrive. Upon closer look, they peer down into the depths of the inner gorges and the Colorado River. Of course, they can’t help but gingerly step at the edge of major overlooks as they try to see the Canyon in all its glory. Most of the visitor-approved steps are polished rock, but the platforms are still mostly wilderness and natural terrain.

What is There to Do in the Grand Canyon?

Visitors often go to the South Rim, coming along the Arizona St Route 64. The South Rim is the busier counterpart of the Grand Canyon. It’s also more accessible than the quieter and more remote part of the North Rim.

Visitors will never run out of things to do at the South Rim. Adventurers can lace up their hiking boots and tackle the many available trails. Families can ooh and aah over the scenic route when they take the heritage train ride. Or, visitors could take the Desert View Drive for an unforgettable journey.

Want to experience how the past visitors felt when they took to the Grand Canyon? Try out the Grand Canyon Railway. It’s a classic taste of the Grand Canyon in its early glory days! Taking the Railway service teleports you back in time. This historic train journeys through a 65-mile track from Williams Arizona to the South Rim of the canyon and offers great views of the Arizona high country along the way.

Train tourists can opt for a variety of attractions. There’s the round trip with accommodation or the ticket-only trip. You can create your own adventure. Classic transportation may be making a comeback with coaches this year. You may even get to peek at the original 1900s steam train, perfectly preserved for public visitations.

America has become almost synonymous with automobiles. It’s the kind of freedom that allows people to go anywhere and see everything! It’s no surprise then, that the Grand Canyon has something for the diehard joyrider. The Desert View Drive is open and the trail winds along the edge of the canyon’s length. The road goes on and on for more than 25 miles. There’s an abundance of panoramic views to stop for. Put on the brakes and climb out to enjoy the magnificent view.

Hiking in the Grand Canyon

If hiking is your thing, there’s no better place to do it than in the Grand Canyon National Park. Around the South Rim, there are plenty of well-established trails that will provide for the hike of a lifetime. All the views you’d expect from this magnificent landscape are waiting for you. You could take the Rim Trail, which takes you from Pipe Creek Vista to Hermits rest, and it’s perfect for children and seniors too, since the pathway is paved.

Biking in the Grand Canyon

There are some routes along the Grand Canyon that are too narrow for vehicles. Visitors can rent a bicycle to get to the unspoiled areas for a unique, unsullied view of the canyon. Visitors can also take a bike tour. A bike ride is perfect for exploring every inch of the Grand Canyon. You can discover exclusive outlooks and hidden paths along the way.

Drop by Bright Angel Bicycles and cafe which is located next door to the visitor center at Mather Point. The cafe shares the bike rental space.

You can’t go riding into the sunset anymore. But there’s always the next best thing – riding a mule at the Grand Canyon! Travel with a sturdy mule and a guide through the trails. Grand Canyon National Park Lodges is offering a four-mile, three-hour mule activity (two-hours in the saddle) that departs five miles east of the Historic Grand Canyon Village in the park.

There’s one more information center located within Mather’s Point. The Grand Canyon Visitor Center has lots of fun activities for the entire family. You can view the exhibits, watch informative films or visit the bookstore. The Information Center is also home to the Ranger program. You can do casual sightseeing or lace up for some serious hiking.

View the exhibits, watch informative films or visit the bookstore.

The massive information center and IMAX Theatre can be found just outside the National Park. There’s a wealth of information to be found here. You can also get a park pass here. The IMAX Theatre movie “Grand Canyon: Hidden Secrets” is an eye-opening film. You’ll learn about the human history and how the natural landscape changed as you watch the film.

The Yavapai Geology Museum is open for visitors who want to know more about the rock formations. You can peruse the detailed topographic relief model or attend a Park Ranger lecture. Discover how the Grand Canyon evolved to the way it is now.

Enter the Grand Canyon via the south and you’ll be treated by a gently sloping plateau that hides an amazing surprise. Visitors are often caught unawares as they walk along the South Rim walkway. Little do they know that the vista will unfold into a mile-deep, 18-mile wide gorge that will take their breath away completely! Seeing the vast canyon is just part of the Canyon’s charm. The gorge is so wide that the best public vantage point only shows a fraction of the whole magnificence of the Grand Canyon.

The fantastic views are the Grand Canyon’s definitive highlight. Drive, fly, walk or ride a bike to any of these locations:

The Grand Canyon Village houses the main park headquarters. It can be located near the south entrance when you enter the Grand Canyon National Park. The company Xanterra Parks and Resorts hold all park accommodations and maintains it for the visitors. This historic village has survived and thrived since the 1800s. Here are its must-visits:

The beautiful and stately El Tovar hotel was built in 1905. Since then, it has accommodated renowned individuals such as Paul McCartney, Bill Clinton, Albert Einstein and Theodore Roosevelt. Here, you can shop, stay at the lounge, eat at a fine dining restaurant or stay the night.

The El Tovar Hotel is one of the oldest lodges at the National Park. It’s also the grandest. The location of the El Tovar Hotel is between the Grand Canyon Hopi House and the Bright Angel Lodge. Most impressive is its proximity to the South Rim’s edge.

The historic Kolb Studio is open to the general public all year long. It has some staple tourist attractions such as an information center, a bookstore and an exhibit venue, courtesy of non-profit Grand Canyon Association. What the store earns from the merchandise are used for care and restoration of Kolb Studio.

The Hopi House resembled the adobe pueblo living similar to that of the Hopi Indians. It started out as a gift shop in 1905. Architect Mary Coulter’s vision was the striking design of the Native American motif. The Hopi House still offers up the finest in certified Native American crafts and artwork. There is a wide variety of handmade goods, including pottery, jewelry, rugs, Kachina dolls, sand paintings, and other eye-catching items. The prices reflect the high quality items. There are even more spectacular items to browse up on the second floor.

Built in 1914 by renowned architect Mary Jane Coulter. It was created to intentionally look like a miner’s cabin, hence the title. You can see the sprawling front porch and the massive fireplace as soon as you step inside. Browse inside for souvenirs or enjoy hot chocolate while browsing for gift items at the shop. The place is only accessible by Park Shuttle, so make sure to park your private vehicle at a nearby place.

Geology of The Grand Canyon

The Grand Canyon is 18 miles wide, more than 250 miles long and is about a mile deep. All that scale is subject to the intricate carvings and natural landscape designs by a millenium of erosion. It’s a geological piece of architecture, valued because of its ancient rock layers magnificently exposed and preserved for the whole world to see, and because it reveals the Earth’s long history. Each layer of exposed rock waves at its visitors in a wide array of natural rock colors which go way back to the pre-Cambian period.

Visitors may also wonder about the rocks as they stare at the Grand Canyon. These rock formations have been proven to date back almost 2 billion years ago (the bottom part).

The question lies – how did the Colorado River form this great divide? It’s still mostly a mystery, but almost all scientists agree that the carving occurred in the span of 5 million years.

The Grand Canyon National Park as of today has been occupied by humans for whole generations. There have been some leftover artifacts and remains which date back almost 12,000 years ago, to Paleo-Indian era to be precise. Up until now, the Grand Canyon has served many purposes.

In fact, the national park has more than 4,000 archaeological resources. Intensive surveying has been done to around 5 percent of the total area. The Grand Canyon National Park is also home to 11 traditionally-assisted tribes and the surrounding minor ethnic groups, some of which claim the archaeological resources to be part of their historical heritage.

Fun Facts About the Grand Canyon

You can literally find a ton of interesting information, facts, geology, history and stories about the Grand Canyon online and in national libraries. Some archaeologists spend their lifetime fathoming the mysteries and exploring the Grand Canyon in all its glory. Here are some quick facts to get you started:

The Grand Canyon is the destination of a lifetime

There’s still more to do around the Canyon than what we can mention here. The South Rim is perfect for families, with plenty of accommodation nearby. But most of all, the Grand Canyon is the destination of a lifetime, and the South Rim is the perfect place to take in the awe of this epic natural wonder.

This airplane tour is the fastest way to get to the Grand Canyon South Rim in the National Park from Las Vegas. Consider taking this direct airplane tour if you are pressed for time. The flight time is an hour up and back, which is fantastic because it takes nearly 6 hours to drive to the Canyon.